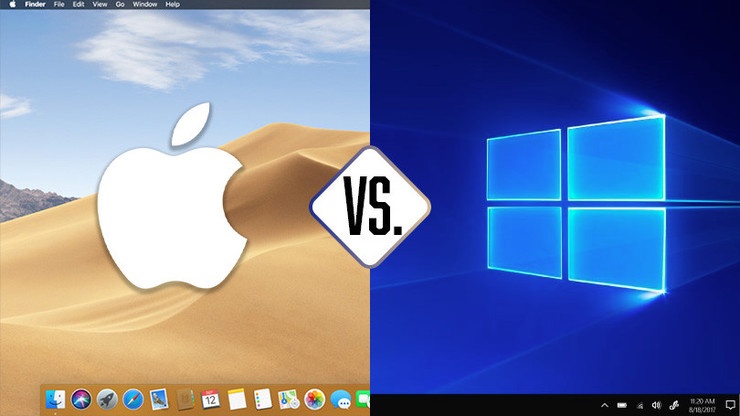 You may remember the Mac Vs PC commercials from a few years ago.

Or see some of the Mac Vs PC memes floating around the internet.

Don’t worry Keanu Reeves. We’ll help you figure it out.

The main difference between Mac and PC is the operating system (often abbreviated as OS). Modern PCs run either Windows 7, 8, or 10. Mac runs OS X and the current version is 10.14 Mojave which was released September 24, 2018.

As far as overall functionality though there are many things that PCs excel at:

There are many manufacturers, models, and configurations of PCs. Many manufacturers allow on their website for you to add or subtract additional hardware so you get the computer best suited for your needs. If you buy a brand new computer it’s most likely going to run Windows 10 but beyond that your options are wide-open.

Acer, HP, and Dell are the manufactures we recommend

Windows-based computers and their accessories are cheap when compared to Apple products. This means that for comparable hardware is hundreds less and also allows for functional budget options exist which can handle the basic tasks.

However, it’s also worth noting that the process is slower on the iMac but the screen and video card are better. Not worth the 700 dollar difference for most people.

Or in the example of Laptops


Technically the HP has a better video card, similar components to the MacBook Pro, all at 1200 dollars less. Those savings equate a very nice second computer!

Lastly as far as comparable desktops go Apple seems to move away from them. If you want a $4,000 monster with server processors they have that:

But they seem to be moving into the All-In-One format for most of their consumer-level, non-laptop products.

Windows machines generally come from the factory with slots left open on the motherboard for expansion options. Video, network, and sound cards can be replaced or added, often times only requiring the appropriate drivers to be installed.

Websites such a PCPartPicker can match up your motherboard with compatible hardware:

That website also shares different custom builds for those looking to get an exact level of performance in a price bracket.

Being a majority of computers are Windows based it’s in the best interest of software developers to invest their time writing for that operating system. Apple also has some barriers to entry and restrictions for software developers which leads to fewer options.

With the exception of a small percentage for Linux or Unix based systems, everything besides that 7% of Apple products, is a Window’s based machine.

This large dominance in the consumer market makes it in the best interest of the software companies to develop their programs for Windows. Many programs that are supported for Mac OS also has a Windows version. It’s rare to find something Apple does that Windows can’t but the reverse is not true.

But it’s not all sunshine and rainbows:

Windows Updates seem to be happening all the time. The next reboot could cost you 20 minutes waiting for an unexpected update to finish installing.

Since Windows Updates are aimed at a wide audience with countless hardware combinations there have been instances of specific computers having certain issue updates.

Depending on hardware, software installed, Windows version, your experience, and integration may feel very different from computer to computer. There are 3rd party Windows applications which will help with the synchronization and integration but they feel clunky compared to Apple’s default apps.

Hackers wish to write viruses and malware which will affect the widest audience. Part of why Windows is constantly updating to fight the constant threat of exploits. Sometimes this issue is compounded when new updates cause new exploits.

Macs are designed to work cohesively with other Apple products. Your iCloud syncs up the text message on your iPhone through iMessage. Your Keychain password can be used to install applications on the computer, sign into websites, and into the computer itself. iTunes can maintain your music library and sync your iPhone with the computer. Their native applications just work and do the job well.

As previously mentioned hackers want the malware or exploit they invest time into to affect the largest group of users. As of the time of this writing, OS X accounts for less than 10% of the world’s computer operating systems. Being as they are a smaller portion of the population and Unix is a more restricted operating system (the backbone of OSX), they rather spend their time on more profitable ventures.

Apple is known for their use of white, chrome, and glass to convey a “premium” look to their products. They’re constantly attempting to make their computers thinner, lighter, more compact, to give you the feeling that you’re living in the future.

With a program called Bootcamp, it is possible to run Windows 10. This is a great article on what some of the possible methods if interested:

Apple Store employees are well trained and experience with hardware related issues of their products. However often times they may encourage you to simply purchase a new computer rather than attempting to repair an old one. Their pricing model on repairs will also help support that sales pitch. Often times going to an Apple Store in person will be your only option when resetting important account passwords as well.

There is a claim that by having hardware components which cannot be changed the software can be optimized for performance with that hardware. Although there is some truth to that, from a business standpoint what it really ensures is that your customers will need to regularly buy a new computer.

This article documents the case where Apple was caught purposely slowing down their iPhones:

Hardware capable of running the latest OS updates will sometimes be cut off solely due to age. Is the processing requirement for Mojave that much more intensive that High Sierra? Probably not but it can be an incentive for a customer to upgrade if you restrict their computer from being able to install it.

Planned obsolescence isn’t a conspiracy theory with Apple products. It’s their business model supported by both directed action and marketing psychology aimed at their users.

If you have the money and want a computer which just works then Macs are a great option. If you don’t want to have to upgrade your computer every other year and money is tight, then a PC is your best choice.